Klik her for dansk tekst

On January 18, 2007, four Schiller Instustute singers (Tom Gillesberg, Feride Istogu Gillesberg, Christina Brun Jensen and Michelle Rasmussen) armed with satirical songs, a big banner and special leaflets, created a very powerful intervention outside the Copenhagen Circus building, where Al Gore and Hans Blix (former UN weapons program chief) were to speak. The national press began to flock around us, clicking pictures and rolling film, and interviewing Tom Gillesberg, the chairman of the Schiller Institute in Denmark, as soon as we unfurled the banner, which read, "Al Clown Comes to Town, Bush and Cheney Love Al Gore, Global Warming is Hot Air, www.schillerinstitut.dk   www.wlym.com," and started singing in bel canto, and handing out literature to the people coming in. 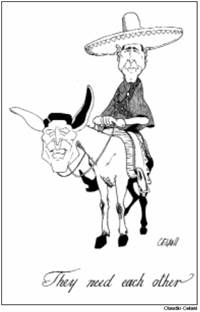 The real hit was the singing. The sound waves totally dominated the environment, with songs about the fraud of global warming; about how Gore brought us Bush, Cheney and the Iraq war; against the Danish Environment Minister Connie Hedegaard getting all hot and wet about Al Gore, and her membership in the interntional financial elite's Bilderberger Club. There was a constant audience of press, attendees, and onlookers waiting to catch a glimpse of Al Gore.

A reporter from TV2, one of the two major national Danish TV channels, first asked for our literature, then our song texts, and then interviewed Tom. He asked what was wrong with Al Gore's film. Tom said that it was Goebbels propaganda, and that all the fuss and money being spent on global warming is being taken away from the people who really need it -- the poor. Yes, we should protect the environment, but not with this anti-scientific propaganda.

We gave the attendees, which included several politicians, and other notables, our latest campaign newspaper, together with a special leaflet, with the headline, "'The Inconvenient Truth' -- Global Warming is Hot Air," which consisited of an article by Larry Hecht in Executive Intelligence Review: "What makes an Ice Age", prefaced with a cartoon of Bush riding into the White House on the back of Al Gore the donkey, from Lyndon LaRouche's 2000 Democratic presidential camapign, by Claudio Celani. (The donkey is also the Democratic Party's mascot.) A small text in Danish reported that Lyndon LaRouche and the LaRouche Youth Movement (LYM) are organizing internationally against a new Iran war and the financial collapse, while Gore is campaigning against industrial growth, on behalf of the financial elite. It also points out that loser Al Gore's campaign brought us Bush.

The singing created so much stir that the police were called, who told us to move to the other 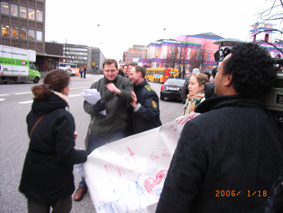 side of the street. When we refused to move, saying that we had the right to be there, one policeman started pushing Tom around, prompting the press to start taking pictures all over again. One of the policemen actually said that we could stand there, but only if we would stopped singing! Refusing to stop singing, and risking arrest, two of us finally went over to the other corner to sing, while the two others continued handing out lit. One attendee in line was overheard saying, "Oh, yes, they had people singing opera." A little bit later, a police paddy wagon came with about eight more policemen, but by that time things had cooled down, and the police told them that they weren't needed.

We waited after the event started, along with the press and the police, to see if we could confront Al himself, but they sneaked him in through another entrance.

The Danish national TV2 network covered our singing demo (in their widely-sceen 7 p.m. news report of January 18, 2007) as the introduction to their report entitled, "Critique of Al Gore," after his speech today in

The report quoted Bjørn Lomborg, an outspoken anti-environmentalist, saying that Gore exaggerates, citing the discrepancy between Gore's figures and a UN report. Also a Danish scientist, Eigil Friis Christiansen, who said that the problem is that Al Gore makes it seem as if the climactic change werey created by human activity, when there are may other causes, including natural changes, for example, changes in our sun. Only then, was Gore quoted, defensively responding to his critics, stating that there are many other problems, but this is the ONLY one which has the potential to extinguish our civilization. The TV spot can unfortunately no longer be seen on their home page, but instead you can watch a 25 second amateur video from the demo (right click to download).